ON THE ROAD WITH ELLISON VOLUME 7 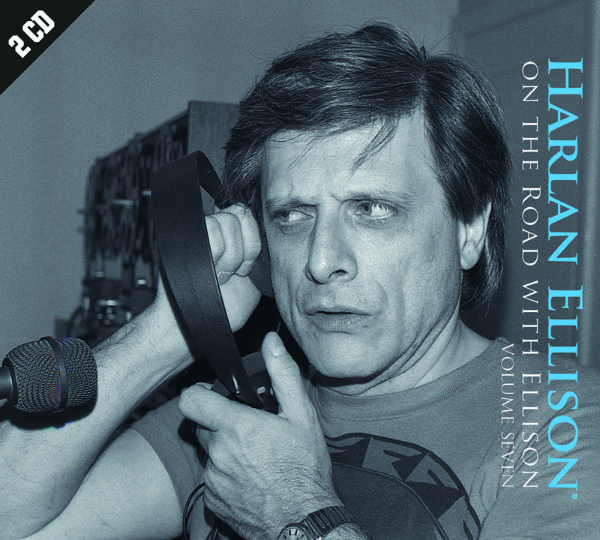 On The Road With Ellison Volume Seven is the latest report from Harlan Ellison and a life lived on the road. This 2CD set includes the long-awaited reissue of An Hour With Ellison not seen since its cassette-only release in 1983. Did the author hang a noose in Gene Roddenberry's office? Does he actually watch Judge Judy? Where does Harlan get his ideas? Should he be in charge of Middle East peace? All will be revealed. Join Harlan on the road and get inside the head of America's most outspoken wordsmith. This is Ellison live on stage and anything goes.

ON THE ROAD WITH ELLISON VOLUME 6 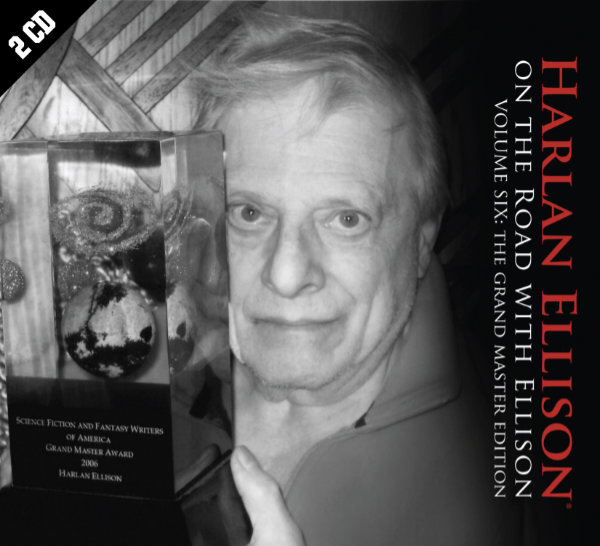 On The Road With Ellison Volume Six is the latest report from Harlan Ellison and a life lived on the road. This 2CD set includes an exclusive new essay and features Harlan's historic 2005 Grand Master Award acceptance speech. Volume Six finds the author impersonating a rabbi, getting kicked out of Brazil, offering his thoughts on Star Wars and saying goodbye to his dear friend Octavia Butler. Follow Harlan on the road and get inside the head of America's most outspoken wordsmith. This is Ellison live on stage and anything goes.

ON THE ROAD WITH ELLISON VOLUME 5 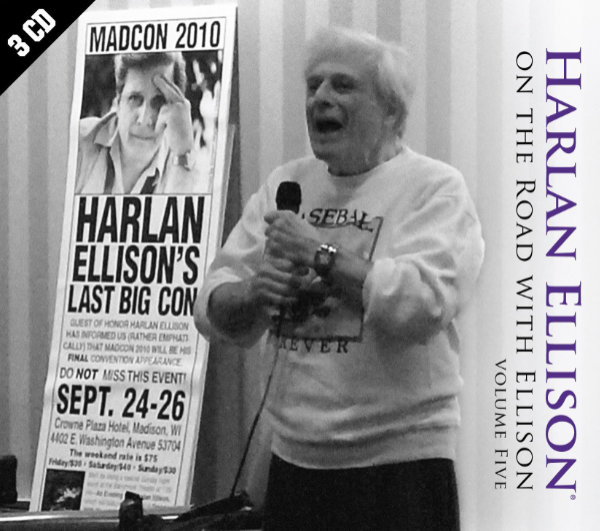 On The Road With Ellison Volume Five is a massive 3CD deluxe set chronicling Harlan's “Last Big Con” and features an exclusive new essay written for this release. The place was Madison, Wisconsin and the event was MadCon 2010. Those thinking that, at 76, Ellison would limp through the weekend did so at their peril. With sunshine falling from his heels, Harlan Ellison took on all comers and spat pearls at the audience for three days straight. No subject was off limits. This is Ellison live on stage and everything must go!

This special 3CD release brings you the best from Harlan Ellison's last ever convention.

ON THE ROAD WITH ELLISON VOLUME 4 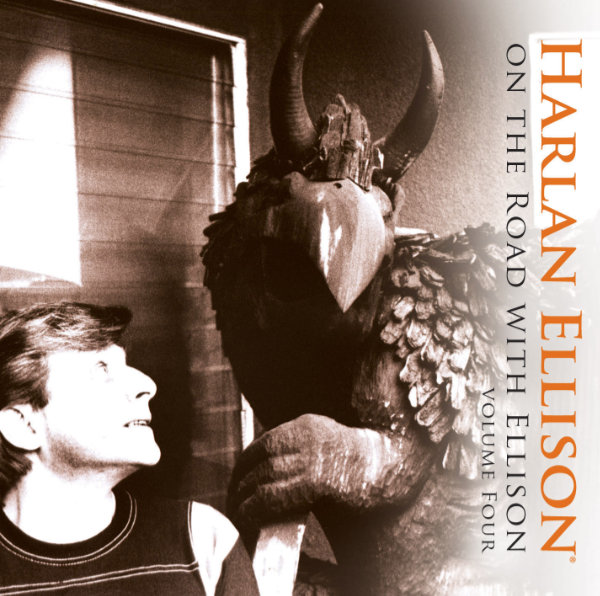 On The Road With Ellison Volume Four is the latest report from Harlan Ellison and a life lived on the road. Featuring an exclusive new essay, Volume Four finds the author lecturing on the merits of Graham Greene to fast food fry cooks, packing heat for a wealthy neurotic, and perhaps blasting The Little Rascals into space – leaving his wife wondering if going to family barbeques are a good idea. Follow Harlan on the road and get inside the head of America's most outspoken wordsmith. This is Ellison live on stage and anything goes.

ON THE ROAD WITH ELLISON VOLUME 3 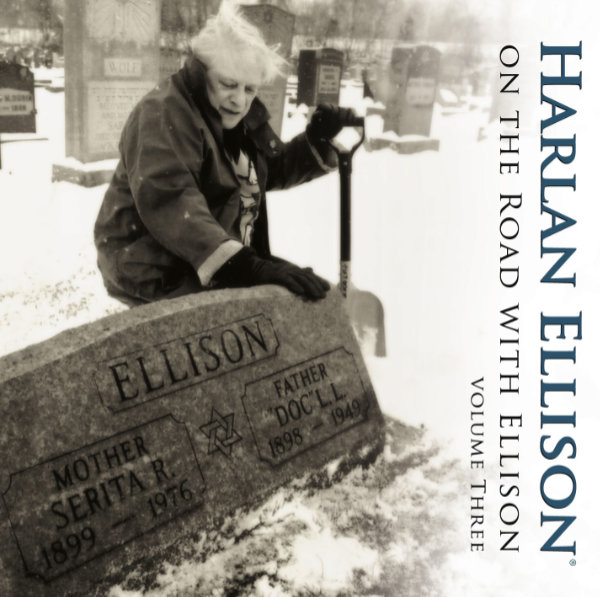 On The Road With Ellison Volume Three is the latest report in from Harlan Ellison and a life lived on the road. Featuring an exclusive new essay, Volume Three finds the author contemplating mortality - his own and that of the world; always with a keen eye, a sharp tongue, and one foot planted firmly in the ass of the terminally stupid. And then there is the matter of Harlan time-traveling to his youth, getting fired from Disney on the first day, and why did he drop that chandelier on those people? This is Ellison live on stage and anything goes.

ON THE ROAD WITH ELLISON VOLUME 2 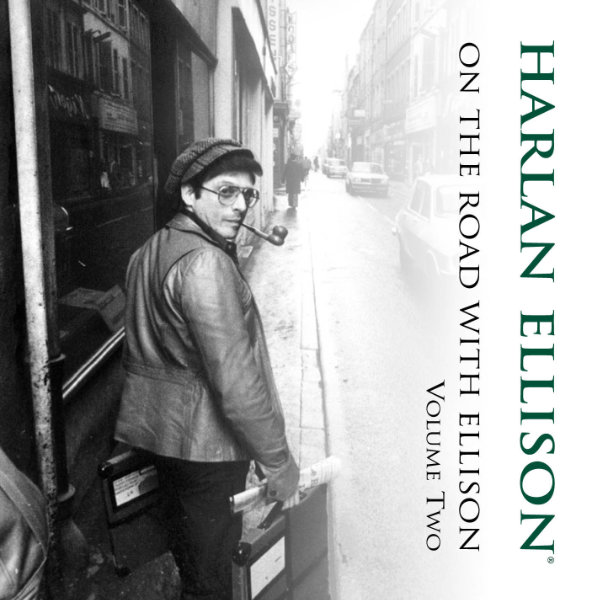 On The Road With Ellison Volume Two is a new collection of funny and thought provoking moments from the vaults. The CD features a new essay written just for this release. Did Harlan actually expose himself during a lecture? Did Ronald Reagan have his phone tapped? Did Harlan drive a woman to set her hair on fire? The answers to these questions and so much more are to be found here. This is Ellison live on stage and anything goes.

ON THE ROAD WITH ELLISON VOLUME 1 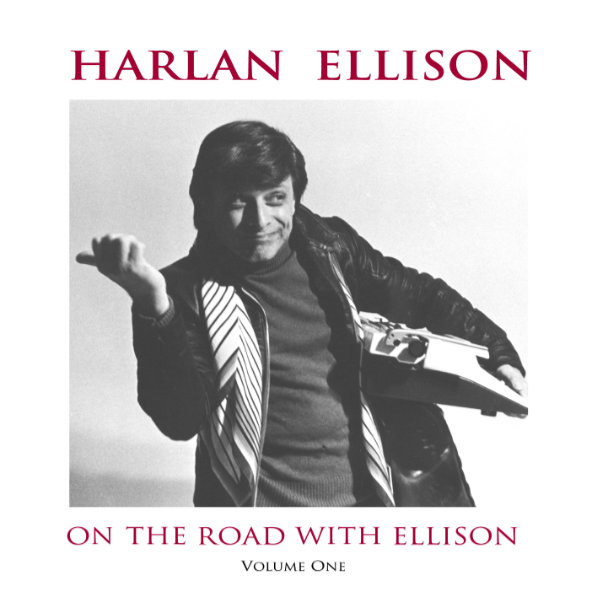 First released in 1983 as an extremely limited edition vinyl album, On The Road With Ellison Volume One has been reissued for the first time after being out of print for many years. This CD features liner notes written by Harlan specifically for this release. From the mailing of a dead gopher to a perfect impression of Tattoo from Fantasy Island - you get inside the head of America's most outspoken wordsmith.

HARLAN ELLISON has been called “one of the great living American short story writers” by the Washington Post; and the Los Angeles Times said, “It’s long past time for Harlan Ellison to be awarded the title: 20th Century Lewis Carroll.”

When Harlan Ellison speaks, nobody is safe. Those who have been exposed to the unfettered mind of Ellison cannot help but be impressed, outraged and thoroughly entertained. The On The Road With Ellison series of CDs are funny and thought provoking collections of moments, jokes and anecdotes that capture Harlan Ellison's antic nature, raw charisma and deep felt humanity. It's not Harlan reading his work; it's a top-off, cranial view of one of America's most outspoken wordsmiths. When Harlan Ellison is live on stage, anything goes.

In a career spanning more than 40 years, he has won more awards for the 75 books he has written or edited, the more than 1700 stories, essays, articles, and newspaper columns, the two dozen teleplays and a dozen motion pictures he has created, than any other living fantasist. He has won the Hugo award 8 times, the Nebula award three times, the Bram Stoker award, presented by the Horror Writers Association, six times (including The Lifetime Achievement Award in 1996), the Edgar Allan Poe award of the Mystery Writers of America twice, the Georges Méliès fantasy film award twice, two Audie Awards (for the best in audio recordings), and was awarded the Silver Pen for Journalism by P.E.N., the international writer’s union (this prestigious accolade was presented for his columns in the L.A. Weekly, titled “An Edge in My Voice,” in defense of the First Amendment). After writing the columns for only 29 weeks, he beat out candidates from the L.A. Times, the N.Y. Times, and the Washington Post. He was presented with the first Living Legend award by the International Horror Critics at the 1995 World Horror Convention.

He is the only author in Hollywood ever to win the Writers Guild of America award for Most Outstanding teleplay (solo work) four times, most recently for “Paladin of the Lost Hour” his Twilight Zone episode that was Danny Kaye’s final role, in 1987. In March (1998), the National Women’s Committee of Brandeis University honored him with their 1998 Words, Wit & Wisdom award.

He has drawn attention to the art of writing by performing the remarkable feat of actually creating and writing and completing stories in the windows of bookstores (in Paris, London, New York, Boston, Los Angeles, San Francisco, New Orleans and elsewhere) in full view of large audiences; stories that have gone on to win major awards and literary prizes. To gain background for his first novel, dealing with juvenile delinquency, he went under an assumed name and ran with a kid gang in Brooklyn’s dangerous Red Hook section for ten weeks. He has covered and written about civil rights marches, riots, antiwar demonstrations and other scenes of civil unrest. His two books of TV essays, THE GLASS TEAT and THE OTHER GLASS TEAT, have sold millions of copies and are currently being taught in media classes in more than 200 American Universities.

Ellison has traveled with rock groups such as The Rolling Stones, and his novel of the scene, SPIDER KISS, is called by critic Greil Marcus “…the finest novel about the world of rock in the past quarter century.”

In a 1980 landmark lawsuit he sued and beat ABC-TV and Paramount Pictures for $337,000 when they plagiarized a television series he had created. This was the famous Brillo/Future Cop case.

Among his most recognized works, translated into more than 40 languages and selling in the millions of copies, are DEATHBIRD STORIES, STRANGE WINE, APPROACHING OBLIVION, I HAVE NO MOUTH & I MUST SCREAM, WEB OF THE CITY, LOVE AIN’T NOTHING BUT SEX MISSPELLED, ELLISON WONDERLAND, MEMOS FROM PURGATORY, ALL THE LIES THAT ARE MY LIFE, SHATTERDAY, and STALKING THE NIGHTMARE; and as creative intelligence and editor of the all-time bestselling DANGEROUS VISIONS anthologies and MEDEA: HARLAN’S WORLD, he has been awarded two Special Hugos and the prestigious Milford Award for lifetime Achievement in Editing. 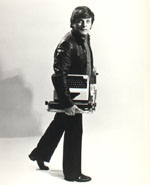 Mr. Ellison worked as a consultant and host for the radio series 2000X, a series of 26 one-hour dramatized radio adaptations of famous SF stories for The Hollywood Theater of the Ear. The series was broadcast on National Public Radio (NPR) in 2000 & 2001. Ellison’s classic story “‘Repent, Harlequin!’ Said the Ticktockman” was included as part of this significant series, starring Robin Williams, with the author in the role of Narrator. Harlan Ellison was awarded the Ray Bradbury Award For Drama Series: For Program Host & Creative Consultant: NPR Presentation of 2000X.

He created great fantasies for The Twilight Zone (including Danny Kaye’s final performance) and The Outer Limits; traveled with The Rolling Stones; marched with Martin Luther King from Selma to Montgomery; once stood off the son of a Mafia kingpin with a Remington XP-100, while wearing nothing but a bath towel; sued Paramount and ABC-TV for plagiarism and won $337,000—and probably is the most contentious person now walking the Earth. But the bottom line, as voiced by Booklist last year, is this: “One thing for sure: the man can write.”

In January 2001, Mr. Ellison signed to develop his award-winning Outer Limits script, DEMON WITH A GLASS HAND, for Miramax’s Dimension Films as a theatrical feature. He is working with director David Twohy whose previous credits include: THE ARRIVAL, PITCH BLACK, G.I. JANE, and THE FUGITIVE. Other Ellison works currently in the pipeline for film and TV include: “Along the Scenic Route,” optioned by Paramount Pictures.

On 22 June 2002, at the 4th World Skeptics Convention, Harlan Ellison was presented with the Distinguished Skeptic Award by The Committee for the Scientific Investigation of Claims if the Paranormal (CSICOP) "in recognition of his outstanding contributions to the defense of science and critical thinking."

To celebrate the golden anniversary of Harlan Ellison’s half a century of storytelling, Morpheus International, publishers of THE ESSENTIAL ELLISON: A 35-YEAR RETROSPECTIVE, commissioned the book’s primary editor, award-winning Australian writer and critic Terry Dowling, to expand Ellison’s three-and-a-half decade collection into a 50-year retrospective. Mr. Dowling went through fifteen years of new stories and essays to pick what he thought were the most representative to be included in this 1000+ page collection. Along with THE ESSENTIAL ELLISON: A 50-YEAR RETROSPECTIVE (Morpheus International), Mr. Ellison’s first Young Adult collection, TROUBLEMAKERS: STORIES BY HARLAN ELLISON, is currently available in bookstores.

And as Tom Snyder said on the CBS Late, Late Show: “An amazing talent; meeting him is an incredible experience.”

On The Road With Ellison is a continuing series of CDs by Harlan Ellison.

To receive updates on future releases and other news: